I’m a Portland native and I remember when the Trailblazers won their one and only NBA Championship in 1977. Portland is a small city and the Blazers are our only big time professional sports team. It isn’t easy being a Blazer fan and I don’t mean to portray myself as one but I am married to one. The Blazers have had good seasons, horrible seasons, made the play-offs, blew it in the playoffs, for awhile we had the JailBlazers because at least one of them seemed to be in trouble with the law all the time. That’s when I checked out on even bothering to notice the Blazers existed. The last game I went to was in the skybox for the company I worked for before I had kids and it was against the Phoenix Suns so probably in the 1995/96 era.

That is until last night!

For those of you, like me, who do not follow professional basketball…the Portland Trailblazers are fighting to stay in the second round of the NBA playoffs after defeating the Houston Rockets with this little piece of magic by Portland’s little Frenchie, Damian Lillard.

That is one of the damndest things I have ever seen in sports. Happily I was actually watching the game and saw it happen!

Stupidly, I liked Damian’s Facebook page the following day which resulted in this Twit from my hilarious daughter, Annie.

The Blazers have been getting absolutely trounced by the San Antonio Spurs in the second round and went into last night’s game down three games to zero games. Sigh. Portlanders get used to this. Close but no cigar. That is one reason, Damian Lillard’s shot with .9 seconds left in the game was so mind-blowing to us….things like that don’t happen to Portland.

Blazers are down three games, must win situation Monday night in Portland. My sister, Molly, has tickets that she can’t use because my nephew had the barfs. Happily they were at the amazing game so Matt will always have that memory! My brother, John, doesn’t want his ticket because the Blazers looked so horrible in Saturday’s game. Voila, two tickets for me and Derwood and we are heading back to Rip City!

Here is the sort of courtyard/park thing they have outside the Moda Center, which was called the Rose Garden (which was stupid because Portland the Rose City has an actual Rose Garden but even duplicating that sounds better than Moda Center).

Here are all the people:

And here are Derwood and I when we get to our incredibly awesome section 117 seats! Row D!!!

At the game, everyone got a T shirt. We got signs that said “The Spirit of 1977”. We got plastic sticks that glowed red when the arena lights came down. Please see below.

At halftime, a guy from the audience was picked to shoot free throws and if he made 3 in 45 seconds, everyone there got a card for a free Jamba Juice. And he did! And the Blazers scored over 100 points so everyone  got McDonald’s gift cards. There was a big blowup car that was an indoor blimp and it would fly around the arena and drop gift cards for movies that no one will want to watch or gift cards to Buffalo Wild Wings.

It was a carnival and it was really fun and I only saw a couple of drunks removed from the game by security and I wasn’t one of them!

The tiniest 13-year-old girl I have ever seen was seated behind us. She may have been solely responsible for the Blazer victory. She cheered and chanted every second that the game was in play. Never lost her enthusiasm. Brought her sign with her, just adorable. I was going to have Derwood take her picture but thought that might come across as creepy so you will just have to take my word for it.

And in the end the Blazers won! 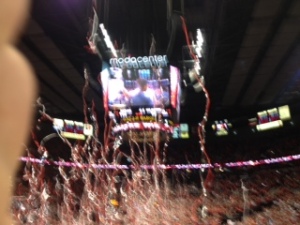 Now back to San Antonio for game 5! Think good thoughts! Portland could use another win!

And if they win, the series comes back to Portland and my brother would probably want to buy me more tickets because I was there when they won, so it’s probably on me to keep them winning.

12 thoughts on “My Return to Rip City”