June 22, Portland, Oregon – Mudd, a 135-pound, rottweiller/black lab mix woke his human, Maggie at 4:45 a.m. by whining loudly while standing on his hind legs with his forelegs on the window sill forcefully pushing at the window screen with his nose. Maggie, heart pounding after being woken from a sound sleep, yelled at Mudd to stop it. When the dog was unwilling to stand down, Maggie got out of bed to look out the window for herself. She saw nothing, no movement and could hear nothing. Mudd was instructed to LIE DOWN, goddammit! The dog lied down just long enough for Maggie to almost return to sleep and then was up again, resting his nose on the window sill breathing heavily and whining.

Maggie’s comments were not suitable for a family publication. 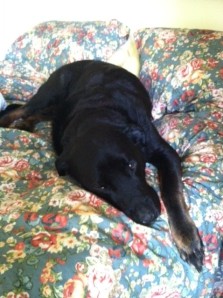 Mudd is exhausted after night of vigilance.

5 thoughts on “Alert Dog The Reblog”