I’m sane again today or saner than yesterday. I took to my bed, curled up in a ball and slept for a couple of hours. Then Derwood came home bringing me two kinds of chicken soup because he’s just caring like that. And then we played “Whose Line Is It Anyway” and I would tell him situations and he would do them and make me laugh. “Be driving when the car in front of you stops short” and then he acts it out and says funny things and I laugh and feel better.

Don, I’m sorry I called you stoopid. You’re a total hot stud of funny blogging and not stoopid at all.

I started reading “A Gate at the Stairs” by Lorrie Moore. It is an engaging read but bits about it niggle at me. That’s right, niggle. The first thing I noticed is that this is one of those books by somebody who has really studied writing. It is rife with similes and metaphors, the moon “crackles” and a something is positioned at an angle like a “geometry problem”.  It is studiously literary. Does that make sense? Her writing is almost self-consciously aware of her writing. 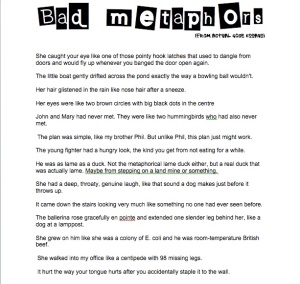 I’m plowing right through it so it’s an engaging book but the excessive creative writing I find a bit distracting. It is also noticeable that the author is shading the book with a bit of a political agenda. I don’t see how it ties into the plot, at least not yet, it’s just a bit odd.

Before that I read “The Gardner Heist” by Ulrich Boser.  The Isabella Stewart Gardner Museum in Boston was robbed March of 1990. I visited it right before the heist — I love the word “heist”.  Paintings by Vermeer, Rembrandt, Degas and Manet were among the artworks stolen. It’s been 23 years and the frames that housed the stolen paintings still hang empty in the museum. A couple of months ago the FBI announced that they know who did it but need to find them.

This is  a real mystery and Ulrich’s research and investigation is extensive and the writing is smooth. He transitions very well between cities and informants and years. I highly recommend it. I find art theft so interesting. Does anyone know of books that follow a painting being stolen and where it goes into the underworld? That’s what they call it “the art underworld”.

And before that I read “In the Garden of Beasts” by Erik Larson who wrote “The Devil in the White City.” This is the story of American Ambassador William Dodd who takes his family with him to his post in Berlin in the 30s during Hitler’s rise. The story is chilling, all the missed opportunities to stop Hitler before he took over the Sudetenland and Poland, etc.  The undercurrent of American antisemitism is also covered.

My goddam doctor’s office just called and I have to go in and I still haven’t lost any weight. Shit. And I can’t stand Hector my doctor’s “assistant” because you can’t say “nurse” anymore apparently. What the hell is wrong with “nurse”? Hector has the bed side manner of a brick. And he’s kind of judgy and has no sense of humor. He just called to tell me I need to come in if I want my Prozac renewed, which I do. I said okay and he told me to call back and schedule an appointment. I asked if he could just transfer me to the reception desk. “Ohhh, noooooooo….they’re at lunch but they’ll be back in like 5 minutes.”

Ohhhhh, thaaaaaankkkkkssss Hector, you have been no help at all, as always.